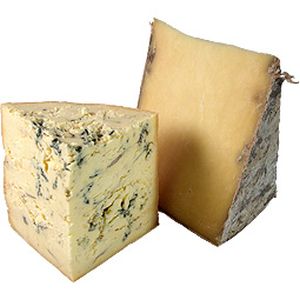 Stichelton is an English blue cheese. It is similar to Blue Stilton cheese, except that it does not use pasteurised milk or factory-produced rennet. Randolph Hodgson of Neal's Yard Dairy and American Joe Schneider produce Stichelton in small batches in a dairy at Cuckney on the northern edge of Sherwood Forest, Nottinghamshire. They use raw milk, rennet from calves' stomachs and hand-ladling and smoothing. The name comes from a form of the name of Stilton village in the 1086 Domesday Book (Stichiltone/Sticiltone), as the name Stilton cannot legally be used for the cheese.

Although most Stilton cheeses have been made with pasteurised milk for many years, until 1989 the Colston Bassett dairy did make one Stilton with unpasteurised milk. However, following an outbreak of food poisoning incorrectly linked to the dairy and subsequently revealed to be unfounded, they decided to end production of the unpasteurised cheese. In 1996, this decision was permanently enshrined when Stilton was awarded Protected Designation of Origin status by the EU, with one of the criteria being the use of pasteurised cows milk.

Stichelton is made in a dairy, from the unpasteurised milk of Friesian-Holstein cows at Collinthwaite Farm, on the Welbeck Estate in Nottinghamshire. ForbesLife magazine described it as a "sumptuous cheese that sets a full-flavored, succulent, complex chain of sensations going in your mouth: fruity and salty, buttery, and earthy, sharp and creamy. Robin Hood never had it so good." The starter culture for the cheese is known as MT36, the original culture used in the pre-1989 unpasteurised Stiltons, and is different from the culture that is used in modern pasteurised ones. MT36 was nearly lost to the cheese world forever, but fortunately a vial of it was sent to Ray Osborne, a starter producer, who kept it alive for 18 years.