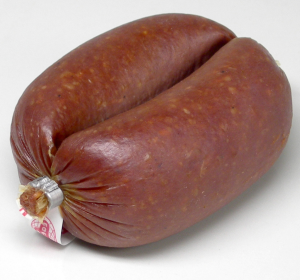 Sujuk, often spelled sucuk, is a dry, spicy sausage eaten from the Balkans to the Middle East and Central Asia.

Sujuk consists of ground meat (usually beef, but pork is used in non-Muslim countries and horse meat in Kazakhstan and Kyrgyzstan), with various spices including cumin, sumac, garlic, salt, and red pepper, fed into a sausage casing and allowed to dry for several weeks. It can be more or less spicy; it is fairly salty and has a high fat content.

Sujuk may be eaten cooked (when raw, it is very hard and stiff). It is often cut into slices and cooked without additional oil, its own fat being sufficient to fry it. At breakfast, it is used in a way similar to bacon or spam. It is fried in a pan, often with eggs (e.g. as breakfast in Egypt), accompanied by a hot cup of sweet black tea. Sujuk is sometimes cooked with haricot bean or incorporated into pastries at some regions in Turkey. In Bulgaria, raw, sliced sujuk is often served as an appetizer with rakia or other high alcoholic drinks. In Lebanon, cooked sliced sujuk is made into sandwiches with garlic sauce and tomato.

Sujuk is also commonly used as a topping on savoury pastries in Iraq, Syria, Egypt, Palestine, Israel and Lebanon; sujuk shawarma is also occasionally found. Akin to sujuk shawarma, sujuk döner was also introduced in Turkey in late 1990s.
Post your comment ...
sign in with ...
missing class include : daIp