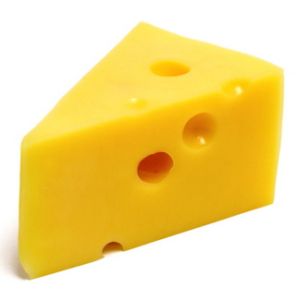 Swiss cheese is a generic name for several related varieties of North American cheese which resemble Emmental cheese, a yellow, medium-hard cheese that originated in the area around Emmental, in Switzerland. Some types of Swiss cheese have a distinctive appearance, as the blocks of the cheese are riddled with holes known as "eyes". Swiss cheese without eyes is known as "blind"

Three types of bacteria are used in the production of Emmental cheese: Streptococcus salivarius subspecies thermophilus, Lactobacillus, and Propionibacterium. In a late stage of cheese production, the propionibacteria consume the lactic acid excreted by the other bacteria and release acetate, propionic acid, and carbon dioxide gas. The carbon dioxide slowly forms the bubbles that develop the "eyes".

The acetate and propionic acid give Swiss its nutty and sweet flavor. Historically, the holes were seen as a sign of imperfection and cheese makers originally tried to avoid them by pressing during production. In modern times, the holes have become an identifier of the cheese.

In general, the larger the eyes in a Swiss cheese, the more pronounced its flavor because a longer fermentation period gives the bacteria more time to act. This poses a problem, however, because cheese with large eyes does not slice well and comes apart in mechanical slicers. As a result, industry regulators have limited the eye size by which Swiss cheese receives the Grade A stamp.