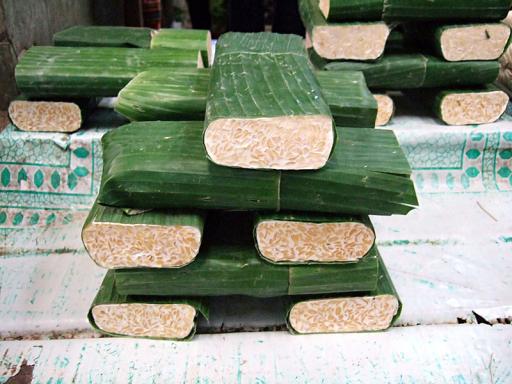 Tempeh  is a traditional soy product originally from Indonesia. Tempeh is made from cooked and slightly fermented soybeans and formed into a patty, similar to a very firm veggie burger. Many commercially prepared brands add other grains, such as barley, and also add spices and extra flavors. Although tempeh is made from soy, it has a unique taste and is mildly flavorful on it's own, unlike tofu.

Tempeh is made with whole soybeans, which are softened by soaking, and dehulled, then partly cooked. Specialty tempehs may be made from other types of beans, wheat, or may include a mixture of beans and whole grains.

Traditional tempeh is often produced in Indonesia using Hibiscus tiliaceus leaves. The undersides of the leaves are covered in downy hairs known technically as trichomes to which the mold Rhizopus oligosporus can be found adhering to in the wild. Soybeans are pressed into the leaf, and stored. Fermentation occurs resulting in tempeh.

Nutrition
The soy carbohydrates in tempeh become more digestible as a result of the fermentation process. In particular, the oligosaccharides associated with gas and indigestion are greatly reduced by the Rhizopus culture.

Preparation
In the kitchen, tempeh is often prepared by cutting it into pieces, soaking in brine or salty sauce, and then frying. Cooked tempeh can be eaten alone, or used in chili, stir frys, soups, salads, sandwiches, and stews. Tempeh's complex flavor has been described as nutty, meaty, and mushroom-like. It freezes well, and is now commonly available in many western supermarkets, as well as in ethnic markets and health food stores. Tempeh performs well in a cheese grater, after which it may be used in the place of ground beef (as in tacos). When thin-sliced and deep-fried in oil, tempeh obtains a crisp golden crust while maintaining a soft interior—its sponge-like consistency makes it suitable for marinating. Dried tempeh (whether cooked or raw) is more portable and less perishable and may be used as a stew base.