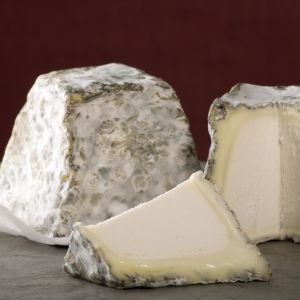 Valençay cheese is one of the classic French cheeses made in the province of Berry in central France. It is named after the town of Valençay in the Indre department, France.

Valençay is an unpasteurized goats-milk cheese. Its rind has a rustic blue-grey color which is made by the natural moulds. The rind is then are darkened by dusting charcoal powder. It is available usually between March and December, with peak manufacture between April and August.

Distinctive in its truncated pyramidal shape, Valençay cheese reveals an interesting folklore which says that the cheese used to have a shape of perfect pyramid. But, when Napoleon saw this local cheese of Valencay, where he stopped over after returning from disastrous Egyptian expedition, he cut of the tip of cheese out of rage caused by unpleasant memories of war in Egypt. Since then, the cheese is made in form of truncated pyramid.