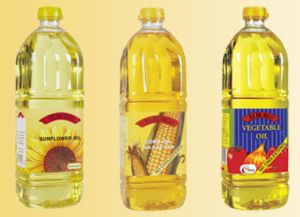 Oils obtained from a vegetable source, including soy beans, peanuts, cottonseeds, and palms.

A vegetable oil is a triglyceride extracted from a plant. Such oils have been part of human culture for millennia. The term "vegetable oil" can be narrowly defined as referring only to substances that are liquid at room temperature, or broadly defined without regard to a substance's state of matter at a given temperature. For this reason, vegetable oils that are solid at room temperature are sometimes called vegetable fats. Vegetable oils are composed of triglycerides, as contrasted with waxes which lack glycerin in their structure. Although many plant parts may yield oil, in commercial practice, oil is extracted primarily from seeds.

They are used in cooking and salad oils and dressings and frying.

Uses:
Many vegetable oils are consumed directly, or indirectly as ingredients in food a role that they share with some animal fats, including butter and ghee. The oils serve a number of purposes in this role:

Shortening – to give pastry a crumbly texture.
Texture – oils can serve to make other ingredients stick together less.
Flavor – while less-flavorful oils command premium prices, some oils, such as olive, sesame, or almond oil, may be chosen specifically for the flavor they impart.

Flavor base – oils can also "carry" flavors of other ingredients, since many flavors are present in chemicals that are soluble in oil.
Secondly, oils can be heated and used to cook other foods. Oils suitable for this objective must have a high flash point.
Such oils include the major cooking oils, soybean, canola, sunflower, safflower, peanut, cottonseed, etc. Tropical oils, such as coconut, palm, and rice bran oils, are particularly valued in Asian cultures for high temperature cooking, because of their unusually high flash point.

Other significant triglyceride oils include:
Corn oil, one of the most common cooking oils, which is used for cooking oil, salad dressing, margarine, mayonnaise, prepared goods like spaghetti sauce and baking mixes, and to fry prepared foods like potato chips and French fries.

Hazelnut and other nut oils

Sesame oil, used as a cooking oil, and as a massage oil, particularly in India