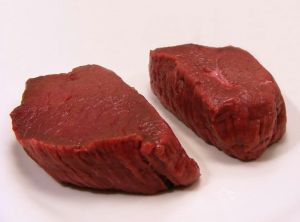 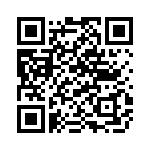 Venison is the meat of a game animal, especially a deer. Venison originally described meat of any game animal killed by hunting, and was applied to any animal from the families Cervidae (deer), Leporidae (hares), and Suidae (wild pigs), and certain species of the genus Capra (goats and ibex), but in the northern hemisphere the word's usage is now almost entirely restricted to the flesh of various species of deer. 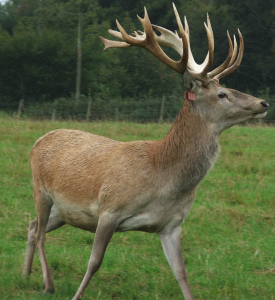 Venison may be eaten as steaks, tournedos, roasts, sausages, jerky and minced meat. It has a flavor reminiscent of beef, but is richer and can have a gamey note. Venison tends to have a finer texture and is leaner than comparable cuts of beef. However, like beef, leaner cuts can be tougher as well.

Organ meats of deer are eaten, but would not be called venison. Rather, they are called noumbles. This is supposedly the origins of the phrase "humble pie", literally a pie made from the organs of the deer.

Venison is higher in moisture, similar in protein and lower in calories, cholesterol and fat than most cuts of grain-fed beef, pork, or lamb.

Venison has enjoyed a rise in popularity in recent years, owing to the meat's lower fat content. It can often be obtained at less cost than beef by hunting (in some areas a doe license can cost as little as a few dollars); many families use it as a one to one substitute for beef, especially in the US mid-south, Midwest, Mississippi Valley and Appalachia. In many areas, this increased demand has led to a rise in the number of deer farms.Venison jerky can be purchased in some grocery stores or ordered online, and is served on some airlines.

Venison burgers are typically so lean as to require the addition of fat in the form of bacon, olive oil or cheese, or blending with beef, to achieve parity with hamburger cooking time, texture, and taste. Some deer breeders have expressed an interest in breeding for a fatter animal that displays more marbling in the meat.

good way to know a lot about food