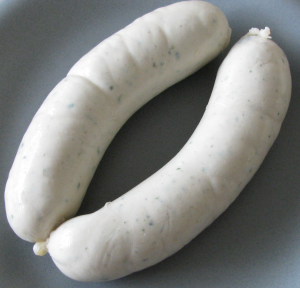 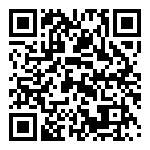 Weisswurst is a traditional Bavarian sausage made from very finely minced veal and fresh pork back bacon. It is usually flavoured with parsley, lemon, mace, onions, ginger, and cardamom, although there are some variations. Then the mixture is stuffed into fresh, clean pork casings and separated into individual sausages measuring about ten to twelve centimeters in length and about two centimeters in thickness.

As it is very perishable, Weisswurst is traditionally manufactured early in the morning and prepared and eaten as a snack between breakfast and lunch there is a saying that the sausages should not be allowed to hear the church bells' noon chime. Traditionally, Weisswurst may only be served until midday because preservatives are not used, the meat is not smoked, and hence the sausage is made fresh every day. Before modern refrigeration technologies, in summertime the sausages would go bad before nightfall. Even today, most Bavarians eat their Weisswurst before noon.

The sausages are heated in salted water well short of boiling, for about ten minutes, which will turn them greyish-white because no color-preserving nitrite is used in Weisswurst preparation.

Weisswurst is brought to the table in a big bowl together with the cooking liquid used for preparation, then eaten without the skin. Ways of eating Weisswurst include the traditional way, called zuzeln, in which each end of the sausage is cut or bitten open, then the meat is sucked out from the skin. Alternatively, the more popular and more discreet ways of consuming it are by cutting the sausage longways and then "rolling out" the meat from the skin with a fork, or just ripping the sausage apart and consuming the filling.

Weisswurst is commonly served with a special Bavarian sweet mustard and accompanied by Brezen and Weissbier.

Weisswurst is rarely eaten in other parts of Germany besides Bavaria a fact that helped coin the term Weißwurstäquator.
Post your comment ...
sign in with ...
missing class include : daIp