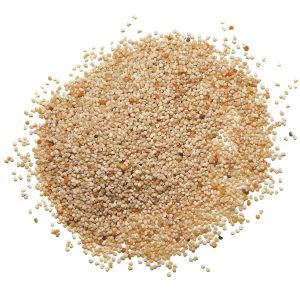 Poppy seed is an oilseed obtained from the opium poppy. The tiny kidney-shaped seeds have been harvested from dried seed pods by various civilizations for thousands of years. The seeds are used, whole or ground, as an ingredient in many foods, and they are pressed to yield poppyseed oil.

Poppy seeds have long been used as a folk remedy to aid sleeping, promote fertility and wealth, and even to provide supposed magical powers of invisibility.

Poppy seeds are less than a millimeter in length, and minute: it takes 3,300 poppy seeds to make up a gram, and a pound contains between 1 and 2 million seeds. The primary flavor compound is 2-Pentylfuran.

The seeds of other poppy types are not eaten, but they are cultivated for the flowers they produce. Annual and biennial poppies are considered a good choice to cultivate from seed as they are not difficult to propagate by this method, and can be put directly in the ground in January. The California poppy, for example, is a striking orange wildflower that grows in the Western and Northwestern United States.

The poppy seed harvest can be a by-product of opium poppy cultivation for opium, poppy straw, or both opium and poppy straw. Conversely, poppy straw can be a by-product of cultivation of poppy seeds.Poppy seeds have primarily culinary uses, as intact seeds and as a paste of ground seeds. The seeds are used as a spice, a condiment, a decorative garnish, a thickener, and a main ingredient. They are used in many baked goods, main course dishes, and desserts.

They are also the source of poppyseed oil, and the solids that remain after the oil is expressed are a valuable animal feed. Poppy seeds are often a component of bird seed mixtures for both wild and domestic birds as they are very nutritious and can also be given separately in higher amounts to treat gastrointestinal distress, diarrhoea, and similar afflictions as well as pain and discomfort in many types of birds. In Ayurveda, poppy seeds are used for diarrhea, abdominal pain, cough, and insomnia. Powdered dosages range from 1/4 to 1 g.


Poppy seeds are effective in quenching thirst, fever, inflammation, constipation and irritation of the abdomen.

Poppy seeds are one of the necessary ingredients in many cooling medicines.

Poppy seeds act as a supply of your daily dose of minerals like iodine, manganese, zinc, magnesium and copper.

The oil from poppy seeds plant is useful in treating carcinoma as it contains monounsaturated fatty acids.

As an Ayurvedic medicine, these seeds are sometimes grounded into a paste with milk to form a skin-renewing moisturizer.

These seeds have a decent supply of fatty acids that are needed for the body’s physiological state. They are found to be rich in omega-3 fatty acids.

Poppy seeds relatively contain lower quantity of alkaloids and are used in the treatment of various nerve disorders.