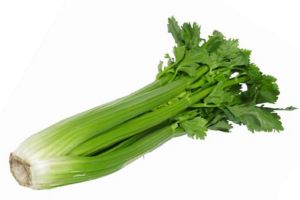 Celery is a plant variety in the family Apiaceae, commonly used as a vegetable. The plant grows to 3.3 ft tall. The leaves are pinnate to bipinnate with rhombic leaflets 3–6 cm long and 2–4 cm broad. The flowers are creamy-white, 2–3 mm in diameter, and are produced in dense compound umbels. The seeds are broad ovoid to globose, 1.5–2 mm long and wide.
Celery cooked by Pressure Cook, Microwave, Stir Fry or Saute, Steam, Braise, Boil or  Raw.

Uses
Crop the stalks and the leafy tops and eat raw in a salad. Braise to eat as a side dish; slice diagonally for stir fries or chop and add to soups and stews.
Celery is used around the world as a vegetable for the crisp petiole. The leaves are strongly flavoured and are used less often, either as a flavouring in soups and stews or as a dried herb.
In temperate countries, celery is also grown for its seeds. Actually very small fruit, these "seeds" yield a valuable volatile oil used in the perfume and pharmaceutical industries. They also contain an organic compound called apiol. Celery seeds can be used as flavouring or spice, either as whole seeds or ground and mixed with salt, as celery salt. Celery salt can also be made from an extract of the roots, or using dried leaves. Celery salt is used as a seasoning, in cocktails, on the Chicago-style hot dog, and in Old Bay Seasoning.

Celery, onions, and bell peppers are the "holy trinity" of Louisiana Creole and Cajun cuisine. Celery, onions, and carrots make up the French mirepoix, often used as a base for sauces and soups. Celery is a staple in many soups, such as chicken noodle soup.

Health Benefits of Celery
1. One large stalk contains only 10 calories! So, adding  celery in your salads, soups and stir-fries help to manage weight.

2. If you are suffering from joint pains, lung infections, asthma, or acne, eating more celery will bring much-needed relief.

3. The minerals in celery, especially magnesium, and the essential oil in it, soothe the nervous system. If you enjoy a celery-based snack in the evening, you will sleep better.

4. It regulates the body’s alkaline balance, thus protecting you from problems such as acidity.

5. some say celery tastes like “crunchy water,” and that is the reason it is so good for your digestive system.  The high water content of celery, combined with the insoluble fiber in it, makes it a great tool for easy passage of stool. Note: because celery has diuretic and cleansing properties, those with diarrhea should avoid eating it.

6. Celery does contain sodium, but it is not the same thing as table salt. The salt in celery is organic, natural and essential for your health.

7. One large stalk of celery can deliver up to 10 percent of your daily need for Vitamin A, a group of nutrients that protects the eyes and prevents age-related degeneration of vision.

8. It gives the vegetable its flavor and scent. A Chicago University research shows that just two stalks of celery a day can reduce bad cholesterol (LDL) by up to 7 points.

10. Celery–androstenone and androstenol–boost your arousal levels. They are released when you chew on a celery stalk.

11. Two studies at the University of Illinois show that a powerful flavonoid in celery, called luteolin, inhibits the growth of cancer cells, especially in the pancreas. Another study suggests that the regular intake of celery could significantly delay the formation of breast cancer cells.