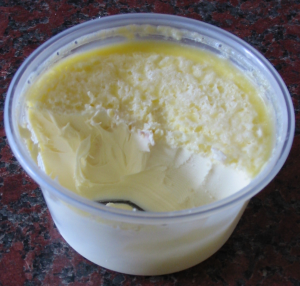 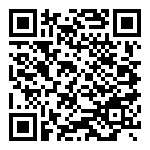 Clotted cream is a thick cream made by indirectly heating full-cream cow's milk using steam or a water bath and then leaving it in shallow pans to cool slowly. During this time, the cream content rises to the surface and forms 'clots' or 'clouts'. It forms an essential part of a cream tea.

Although its origin is uncertain, the cream's production is commonly associated with dairy farms in South West England and in particular the counties of Cornwall and Devon. The current largest commercial producer in the UK is Rodda's in Redruth, Cornwall, which can produce up to 25 tons (25,000 kg; 55,000 lb) of clotted cream a day. In 1998 the term Cornish clotted cream became a Protected Designation of Origin (PDO) by European Union directive, as long as the milk is produced in Cornwall and the minimum fat content is 55%.

Clotted cream has been described as having a "nutty, cooked milk" flavour, and a "rich sweet flavour" with a texture that is grainy, sometimes with oily globules on the crusted surface. It is a thick cream, with a very high fat content (a minimum of 55%, but an average of 64%); in the United States it would be classified as butter. For comparison, the fat content of single cream is only 18%. Despite its popularity, virtually none is exported due to its short shelf life.

Due to its high saturated fat content, the regular consumption of clotted cream is usually thought to be bad for health, though some dairy fat in the diet is considered beneficial. A 2006 survey of nutrition professionals ranked clotted cream as the least healthy of 120 foods selected to be representative of the British diet. According to the United Kingdom's Food Standards Agency, a 100-gram (3.5 oz) tub of clotted cream provides 586 kilocalories (2,450 kJ), roughly equivalent to a 200-gram (7.1 oz) cheeseburge.

Clotted cream is an essential part of a cream tea, a favourite with tourists in Cornwall and Devon. It is served on scones or the more traditional 'splits' in Cornwall with strawberry or raspberry jam, along with a pot of tea. Traditionally, there are differences in the way it is eaten in each county: in Devon, the cream is traditionally spread first on the scone, with the jam dolloped on top; in Cornwall the jam is spread first with a dollop of cream. Cream teas spread to southern Australia as early immigrants from Cornwall and Devon took their traditional recipes with them. In 2010, Langage Farm in Devon started a campaign for "Devon cream tea" to have protected designation of origin similar to "Cornish clotted cream". One variation on a cream tea is called "Thunder and Lightning" which consists of a round of bread, topped with clotted cream and golden syrup, honey or treacle.

Confectionery
It can be used as an accompaniment to hot or cold desserts. Clotted cream, especially clotted cream from Devon, where it is less yellow due to lower carotene levels in the grass, is regularly used in baking. It is used throughout the south-west of England in the production of ice cream and fudge.

Savoury dishes
Clotted cream is used in some savoury dishes, and can be incorporated into mashed potato, risotto or scrambled eggs.

Historical
Cabbage cream (which does not contain cabbage) was a delicacy in the mid-17th century: layers of clotted cream were interspersed with sugar and rosewater, creating a cabbage effect when served. It was a common accompaniment to junket, a milk-based dessert which went out of fashion in the mid-20th century.

Notable usages
During the reception following the wedding of Prince Charles and Lady Diana Spencer in 1981, one course was strawberries and Cornish clotted cream.