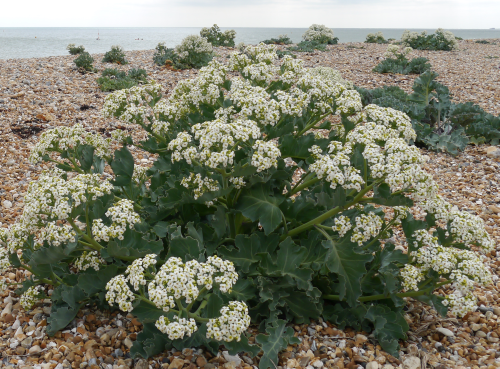 Crambe maritima (common name sea kale, seakale or crambe) is a species of halophytic flowering plant in the genus Crambe of the family Brassicaceae , that grows wild along the coasts of Europe, from the North Atlantic to the Black Sea.
Growing to 30 in tall by 24 in wide, it is a mound-forming, spreading perennial. It has large fleshy glaucous collard-like leaves and abundant white flowers. The seeds come one each in globular pods. 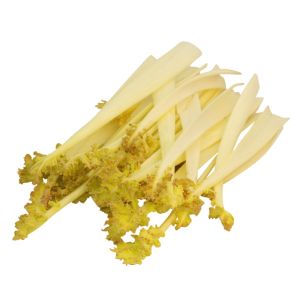 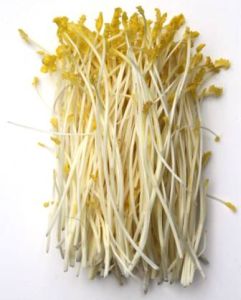 Culinary use
The plant is cultivated as a vegetable, related to the cabbage.
Along the coast of England, where it is commonly found above high tide mark on shingle beaches, local people heaped loose shingle around the naturally occurring root crowns in springtime, thus blanching the emerging shoots. By the early eighteenth century, it had become established as a garden vegetable, but its height of popularity was the early nineteenth century when sea kale appeared in Thomas Jefferson's Garden Book of 1809. It was also served at the Royal Pavilion in Brighton, when Prince Regent George IV of the United Kingdom (1762–1830) used it as a seaside retreat.
The shoots are served like asparagus: steamed, with either a béchamel sauce or melted butter, salt and pepper. It is apt to get bruised or damaged in transport and should be eaten very soon after cutting, this may explain its subsequent decline in popularity. However, given a rich, deep and sandy soil, it is easy to propagate and grow on from root cuttings available from specialist nurseries. Blanching may be achieved by covering it with opaque material or using a deep, loose and dry mulch.
Read More at Wikipedia.